The code requirements related to doors serving roofs have long been a source of confusion, but changes made in the last few editions of the model codes have helped to clarify the intent.  There are two basic types of roofs when it comes to egress requirements – unoccupied roofs which might contain mechanical equipment, and occupied roofs such as those used for roof gardens and roof-top restaurants.  Here are a few of the most frequently asked questions about roof doors:

Is it permissible by code to lock a roof door on the stairwell side, preventing access to the roof?

In most buildings, the path of egress does not pass from the stairwell onto the roof, so the stairwell door can – and should – be locked on the stairwell side to prevent access to the roof.  This is especially true of unoccupied roofs, where allowing building occupants to access the roof may result in accidental falls, attempted suicides, or vandalism.  In the rare circumstance where a means of egress does cross the roof, the roof must be kept clear of snow and ice, and the stairwell door must be code-compliant for egress.  Where a roof is used for emergency egress, an exit alarm or delayed egress lock may be options that will help to deter unauthorized use of the door.

Do the model codes allow a door between the roof and the stairwell to be locked on the roof side for security purposes?

If a roof is not intended to be occupied – like a roof housing mechanical equipment that is only accessed occasionally by technicians – the I-Codes state: Doors serving roofs not intended to be occupied shall be permitted to be locked preventing entry to the building from the roof.  For roofs that are occupied – a roof terrace, for example – editions of the International Building Code (IBC) prior to 2021 did not include prescriptive requirements that would allow the doors to be locked for security.  A new section was added to the 2021 edition of the IBC, which allows egress doors serving exterior spaces to be locked if certain criteria are met.  For more information on this application, refer to this article – Decoded: Egress From Exterior Spaces.

This helps to prevent building occupants from being trapped on a roof because of a locked door that does not allow re-entry into the building.  If the door is always locked on the stair side, it reduces the likelihood that an unauthorized person could access the roof and be unable to re-enter the building.  As the NFPA 101 Handbook says, “Heroic helicopter rescues from rooftops of burning buildings are Hollywood movie illusions that seldom happen in real life.” Are roof doors required to unlock upon fire alarm activation or power failure?

In most cases, roof doors do not require electrified hardware that will unlock automatically during a fire or power failure.  Interior stairwell doors are typically subject to the stairwell reentry requirements that allow building occupants to leave a stairwell and find another exit during a fire.  However, because most roofs are not part of a means of egress, and many roofs do not have access to a second stairwell, building occupants who exit onto the roof during a fire may not have another means of egress to use for evacuation.

There may be exceptions where the local code or Authority Having Jurisdiction (AHJ) requires roof doors to be remotely unlocked, so it’s always best to check the local requirements.

For more information about roof doors, refer to this article – Decoded: Update on Roof Doors, and for answers to more frequently asked questions, check out these recent FAQ posts: 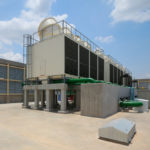