Electromagnetic locks are often used in access control systems because of the relative ease of installation in comparison to other types of electrified hardware – especially when compared with electromechanical locks.  In part, this is because electromechanical locks and electrified trim for panic hardware typically require power transfers and often wire raceways through the door, while mag-locks only require power to the frame head.  The electromagnet in a housing is attached to the frame, with a steel armature secured to the door.  When the magnet is energized, it bonds to the armature and locks the door.

While the installation can be relatively simple, the code requirements that apply to mag-locks are somewhat complicated and can be confusing.  These answers to frequently asked questions should help. One release method addressed in the model codes applies to electrified locks that are released by a switch in the door-mounted hardware.

How are mag-locks released to allow egress?

There are two applications addressed in the model codes that are typically applied to electromagnetic locks.  One is for electrified locks that are released by a sensor detecting a building occupant approaching the door.  The other covers electrified locks released by a switch in the door-mounted hardware – like a panic device, lever handle, or sensor bar with a request-to-exit (RX) switch.  These sections of the codes are not limited to electromagnetic locks, but mag-locks are the most common product used in these applications.

Are back-up release methods required in case the sensor or RX switch does not release the mag-lock?

Yes, both types of systems require alternative release methods.  Sensor-release locks must also be unlocked for egress by an auxiliary switch mounted beside the door (consult the adopted code for more details), and by fire alarm/sprinkler activation and upon power failure.  Electrified locks released by a switch in the door-mounted hardware are not required by the model codes to have the auxiliary push button or fire alarm/sprinkler release, but they must allow free egress upon power failure.  The model codes also require some components of these systems to be listed to UL 294 – Standard for Access Control System Units. When electrified locks are released for egress by a sensor above the door, the lock must also unlock via an auxiliary push button, fire alarm/sprinkler activation, and upon loss of power.

If electromagnetic locks must release upon loss of power, how is security maintained during a power failure?  Is battery backup allowed?

The model building codes and fire codes do not define exactly what “loss of power” means, nor do they specifically address whether battery back-up is acceptable.  One interpretation is that stand-by power of a mag-lock is allowed if the fire alarm system is powered by the same back-up power source.  This helps to ensure that if the fire alarm is activated, the door will unlock for egress.  The fire alarm/sprinkler release is only required for sensor-release systems and not door-hardware-release systems, which may affect the AHJ’s decision on battery back-up for these applications.

What about other types of access control systems that include mag-locks – locks that are not released by a sensor or by an RX switch?

The model codes do address other types of systems where mag-locks might be used, such as delayed egress locks, and the controlled egress locks allowed in health care facilities.  There are separate code sections that include the requirements for these applications.  Mag-locks are also used in interlocks (AKA control vestibules), but these are not currently addressed by the model codes.  Because the codes do not include requirements for this type of system, each interlock/control vestibule must be submitted to the Authority Having Jurisdiction (AHJ) for approval.

As always, the adopted codes should be consulted for the detailed requirements that apply to electromagnetic locks.  Some states and local jurisdictions have modified the model codes with regard to electrified hardware and access control, so local mandates may differ from the model code requirements.  The AHJ is responsible for enforcing the adopted codes and has the final say.

If there are other FAQs you would like to have answered, please leave your questions in the comment box. 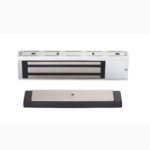 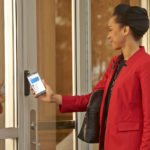