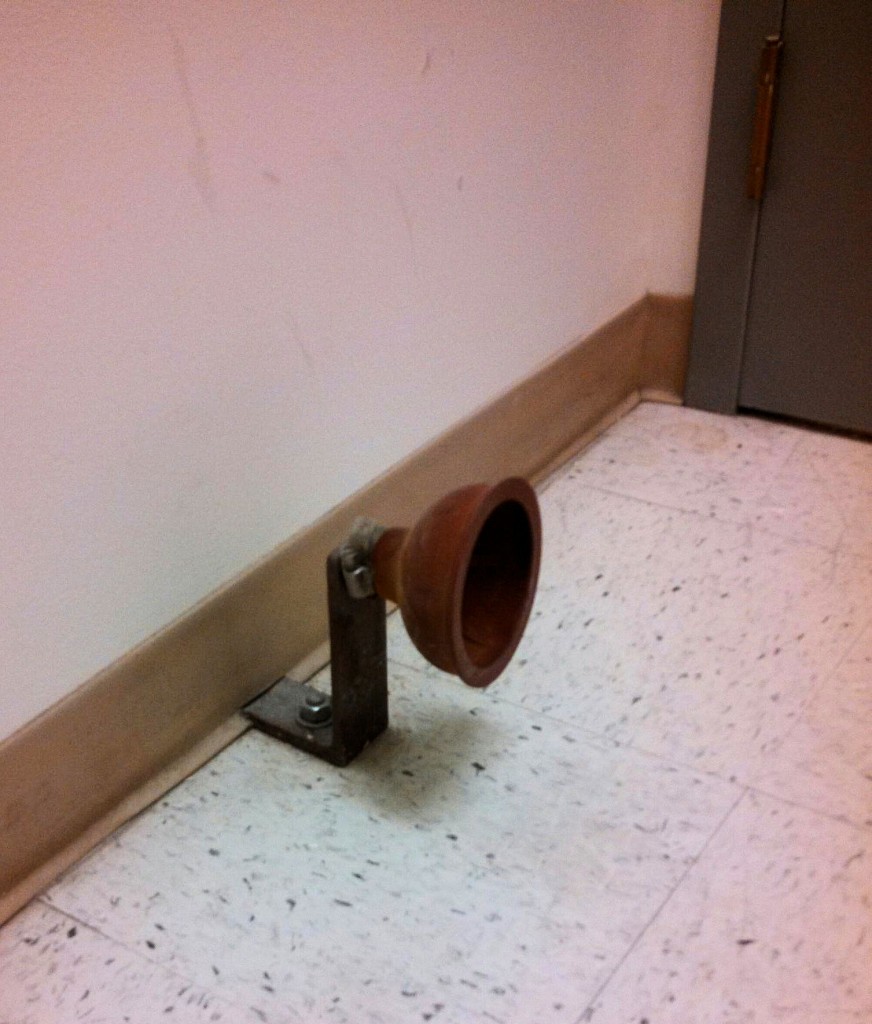 When this great Fixed-it Friday photo showed up in my inbox (sent by John Emry), it made me think about the “why” behind the creative modification.  This improvised hold-open device has been retrofitted on all of the stair doors in this particular school.  Presumably, the teacher leads her line of students down the corridor, pushes the door open until the plunger engages, and the group of students passes through the opening before the door closes.  Ingenious!  Except that it isn’t listed for use on a fire door.

But there is already a product in existence that will perform this function, without the expense of electronics – a delayed action door closer.  The delayed action feature, which has to be part of the original closer and can’t be retrofitted, is a very inexpensive solution.  It will hold the door open for up to a minute (or two, depending on the product), by restricting the fluid flow for a short time.  The delay only engages when the door is opened to the fully-open position, so under normal use there would not be a delay.  But when the teacher pushes the door all the way open, she will have a minute or so to move her class through the door.  This would make it easier for the kids to pass through the opening, and would also save wear and tear on the door, frame, and hardware (have you ever seen a group of middle schoolers make their way to gym class?).

From a code standpoint, I can’t find anything in the codes that would prevent the use of a delayed action closer on a fire door.  The only references to closing speed/time are a minimum of 5 seconds for doors on an accessible route, and a maximum delay of 10 seconds before an automatic-closing door begins to close after released by the fire alarm.  Door closers with delayed action are not automatic-closing doors, they are self-closing, so this section of the code would not apply.  I’ve asked several AHJs and they did not have a problem with having this short delay on a fire door, especially because it only engages when the door is purposely opened to the fully-open position.

Fire doors can be difficult for kids to open because of the increased opening force that is typical for a fire door.  And the doors must be closed during a fire to work as intended and deter the spread of smoke and flames.  If the door is not equipped with a hold-open released by the fire alarm, it is often propped open with a wedge.  If a short delay would remove the temptation to prop the doors open in a way that is not code-compliant, that’s a great improvement.

Should we be specifying delayed action closers on stair and cross-corridor doors in schools?  If you know any teachers, ask them if this would help, and let me know!