FF: At the Airport

FF: At the Airport

People always send me photos with a note saying, “I saw this door and thought of you…”  I LOVE getting those messages (who wouldn’t?)!  And last week when I was flying home from the BHMA meetings, I saw these doors and thought of YOU!  😀

This might seem a little picky, but for delayed egress locks the model codes require signage stating, “Push until alarm sounds, door can be opened in 15 seconds.”  The delayed egress doors in these photos have a couple of variations of that language, but the important things to know are:

a) You don’t have to push on the door for the whole 15 seconds as referenced in the sign on the door – only for 3 seconds maximum to start the 15-second process, and

b) The door does not open after 15 seconds as stated in the signage above the door.  A building occupant would have to push on the panic hardware touchpad again after the 15-second timer elapses. This door from the jet bridge doesn’t seem like a code issue assuming that the panic hardware allows egress.  But it doesn’t seem very secure, if the unauthorized person trying to use the door to enter the terminal can read and pushes the green button to shunt the alarm.  Any theories? 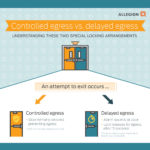