Cocoanut Grove & Our Lady of the Angels

Cocoanut Grove & Our Lady of the Angels

When I teach a code class, I often begin by talking about some of the tragic fires that have shaped today’s codes.  Because of the lessons learned from these fires and the code changes that resulted, the safety of building occupants has been greatly improved.

I talk about the role that doors played in the fire, as a reminder to those in attendance of the importance of code-compliant door openings.  Non-compliant fire and egress doors may be the product of ignorance, indifference, budget cuts, or the opinion that security trumps life safety.  We think “it won’t happen to me”…what are the chances of a fire or other incident that requires emergency egress?  I hope like hell it never does happen to me or anyone I care about, but I’m not taking any chances

This week is the anniversary of two such fires, and there are great articles on the NFPA website which detail the incidents as well as the code changes that resulted: 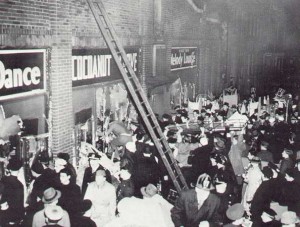 “In the official Boston Fire Department report released after the fire, Fire Commissioner William Arthur Reilly estimated that the fire took only two to four minutes to develop momentum and cross approximately 40 feet of the Melody Lounge to the only public stairway out of the room.  In seconds it had flashed passed the first floor foyer and the main entrance, and into the main dining room. From the first appearance of flame until it had explosively traversed the main dining room and passed, almost 225 feet away, to the entrance of the Broadway Lounge, the commissioner estimated at total time of an incredible five minutes at most. At this point in time, all exits normally open to the public, of which each had something functionally wrong, were useless for a safe escape.“ “Unfortunately, the building failed to meet numerous codes and standards requirements available at the time. The number of people in the building was estimated between 1,200 and 1,300, and the building’s exits did not meet those capacity requirements as specified in the Building Exits Code, now known as NFPA 101, Life Safety Code.  Nor did they meet the enclosure requirements of the Illinois Building Exits Code, which called for enclosed stairways in all schools. There were five interior and one exterior stairways distributed throughout the Our Lady of the Angels school. Of the five interior stairways, only two in the front of the north wing were enclosed…”